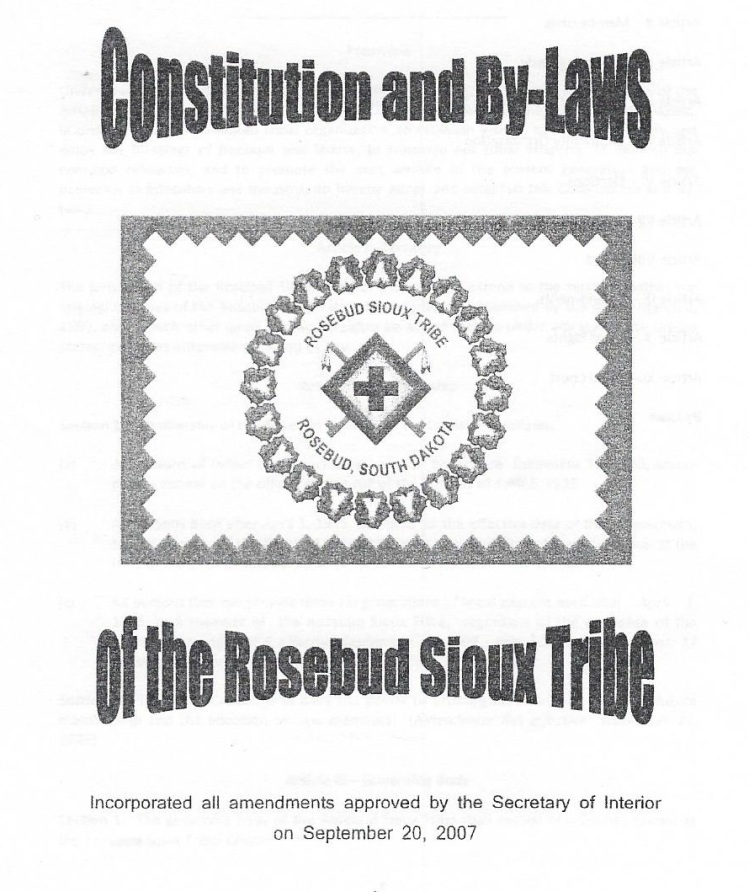 The Rosebud Sioux Tribe will have a Primary Election on July 27. There are 10 tribal council representative positions open, along with the tribal treasurer and secretary positions. According to a public notice issued by the Election Board, 38 tribal citizens have filed nominating affidavits seeking election to 12 open seats.

During the Constitutional Convention held at Rosebud in 2004, tribal voters proposed an amendment they believed would bar citizens with felony criminal convictions from seeking office. Voters in that secretarial election obviously wanted the tribal council and constitutional officer positions filled by candidates without a felony criminal backgrounds. Consequently, after the constitutional amendments went into effect in 2007, the Election Board required all candidates to undergo background investigations. Tribal citizens with a felony conviction were subsequently disqualified from seeking office.

Many tribal citizens believe people with felony convictions should not be able to run for election. They feel strongly against electing people with criminal backgrounds to represent us. Yet, some tribal citizens with felony convictions on their record, who wanted to run for office, appealed to the Rosebud Sioux Tribal Court to rule on the constitutional amendments. So, due to the language contained in the constitution, a Tribal Judge ruled in their favor.

There are 2 sections in the RST Constitution which address the qualifications of candidates seeking election. An excerpt of the first Section 6 reads: Any member of the Sicangu Lakota Oyate at least 30 years of age, who has not been found guilty by the Tribal Council of misconduct in tribal affairs, or who has not been found guilty in a court of law of felony offense involving violence and who can provide affidavits(s) that prove some history of leadership shall be qualified to seek and hold membership on the Tribal Council.

Despite the flaws with our constitution, it’s a document put in place to govern us all. We must respect it. Many tribal citizens would never consider looking for a way around the rules so they could be elected to office. People who look for ways to get around the rules aren’t on my list of role models.

I don’t want my Takoja to believe it is okay to get in trouble, be sentenced to prison and then come home to work on changing their life so they could run for office. It is a blatant display of disrespect for the rules put into place by tribal voters. It also demonstrates arrogance and a lack of self-respect.

Granted, there are many tribal citizens with felony criminal records who’ve turned their lives around after completing their prison sentence or probation. Many are my blood relatives. They’ve changed their lives for the better. They are sober, productive members of society. They are active in Lakota ceremony.

Still, there are many things they cannot do. They will never clear a criminal background investigation. There are certain places, like schools, who will not hire them because of their criminal history.

Consequently, I’ve been attacked on social media for my opinion on tribal citizens with felony convictions running for office. Anger has been directed at me because of my strong opinions. Still, many tribal citizens echo my concerns. In any case, the anger projected at me is not mine, it’s an emotion that the people who carry it must deal with.

Before the constitution was amended to bar felons from elected office, there was a tribal council representative who traveled to Washington DC to attend meetings with federal officials to advocate for the Rosebud Sioux Tribe. When he arrived at a building where one meeting was to be held, he was denied entrance because of his criminal background. Other tribal council representatives expressed to me their embarrassment over this incident.

When I go to the polls to vote in both the primary and general elections, I will support candidates who have cleared a background check. I cannot support anyone on the ballot with a felony conviction, no matter how much they have changed.

Many of us don’t want our children to grow up to be adults who look for ways to get around the rules. Our children need role models who respect the rules to serve as their elected tribal officials. Respecting the rules is being a good ancestor.

Our tribal government might not be the best one around, but it’s the only one we’ve got. It’s up to us as tribal citizens to make sure it isn’t compromised. We all talk about making the laws better, yet the language in the Rosebud Sioux Tribe’s Constitution will remain as is until the people decide to come together and change it.