One of the most amazing things about the anti-pipeline movement is witnessing human beings unite in prayer. The spiritual energy created by the people who came together in this movement was experienced by many visitors to the Oceti Sakowin, Rosebud or Sacred Stone camps. No matter what happens, that spiritual fire will always burn in our hearts.

In the first few days of the resistance against the Dakota Access Pipeline (DAPL), only a handful of people occupied Sacred Stone Camp. A couple of months later, the Water Protector camps were home to 10,000 people. Wopila to all the human beings who’ve established a residence near the Cannon Ball river over the past year. 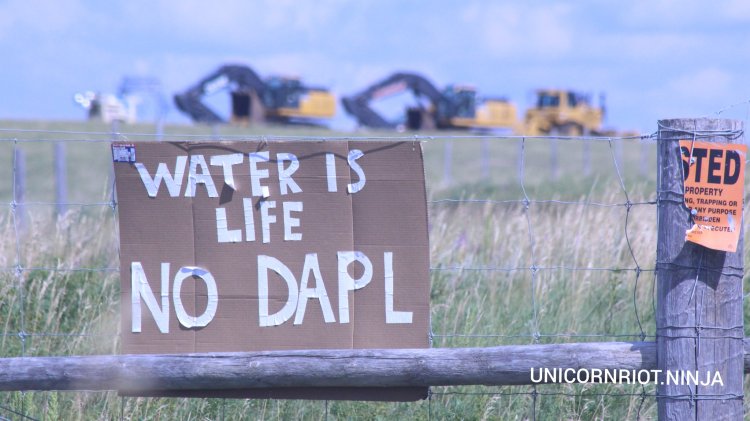 Many people across Unci Maka sacrificed to stand up for the Water of Life. President Obama lent a false sense of hope when he denied a permit for the Keystone XL pipeline. The temporary halt of DAPL construction in December 2016, was another action bringing a false sense of hope that the black snake wouldn’t be built. Yet, believing that the federal government would truly support a permanent halt to more pipeline construction was just too much to hope for.

For many people, it was no surprise to see newly-elected Trump take quick action to revive the big oil pipeline projects after he was sworn in as president. Unfortunately, many of us knew the politicians holding oil investments would push these projects forward. It’s all about the profit margin for these capitalists.

In addition, much of the action Trump has taken or is promising to take, is not environmentally friendly at all. The fight against those who’ve made it their life purpose to destroy Mother Earth has just started. In the continuing battle to project Mother Earth, we have to remember that our own people are not to blame.

For example, there are derogatory remarks posted on social media about elected officials at Standing Rock. Granted, there aren’t many fans of the Indian Reorganization Act (IRA) systems governing our reservations, but it’s the only form of government we have. And nothing about tribal government is going to change until we unite as tribal citizens and fix it ourselves. In any case, it’s extremely disheartening to read the negativity of people’s minds on public social media platforms.

There are also social media musings written by people questioning the validity of all the prayer that’s been made for the Water of Life. People who question the power of prayer show their lack of faith. Without faith, you will always question your prayer.

These are examples of lateral violence. When an individual uses their energy to lash out at others, it shows how much of their focus is on others, instead of their own self-improvement. Focusing on the perceived shortcomings of others won’t heal us. Each individual has to do their own work to heal their inner spirit.

Wikipedia defines Lateral Violence as something which “occurs within marginalized groups where members strike out at each other as a result of being oppressed. The oppressed become the oppressors of themselves and each other. Common behaviors that prevent positive change from occurring include gossiping, bullying, finger-pointing, backstabbing and shunning.”

Lateral violence is the residual of intergenerational trauma that many of us carry because of our history with the government; it continues to cripple our efforts at healing. Some healing is work we must do on ourselves. We have to help one another understand how violence inflicted upon on ancestors still affects us today. The more steps we take on our path to healing, the less painful that same journey will be for our descendants.

Again, the fight for Mother Earth has only just begun. Our energy would be better used fighting the real enemy, who are moving now to kill our planet. If you can’t travel to a protest site, you can always pray. Despite what some may believe, it’s the daily prayers of the faithful that have transformed the anti-pipeline movement into what it is today.

Posting crap about your own people on Facebook doesn’t do Mother Earth any good. It just shows the rest of us how much healing you need to go through in order to get over your tendency to engage in lateral violence. Time grows short. Look within and heal yourself. Our children are depending on healthy adults to protect the Mni Wiconi and save Unci Maka.