Wopila to President Obama for denying the permit which would have granted TransCanada permission to construct their Keystone XL pipeline through our homelands. There were many human beings involved in this fight over the past several years. Our prayers were answered last week when President Obama announced his decision to deny the permit.

Water is life. We have to drink water to live. The Keystone XL pipeline would have threatened our major water source. This pipeline was being proposed to be built directly over the Ogallala Aquifer. It would have also crossed countless bodies of water. This project would have affected all of us.

I remember testifying at a hearing hosted by the State Department in Pierre regarding the application for a Presidential permit. It was a scary day for me. There was a mob of roughnecks there. Those who testified in favor of the pipeline were like robots. Many grassroots people spoke up for Mother Earth that day. As we testified on behalf of our sacred Water, we were all laughed at by the fans of big oil.

So, this week many of us are thanking President Obama for denying TransCanada’s permit application. But this action would not have happened without the effort of all the pipeline fighters. Individuals and organizations came together to speak out against the construction of this project. They also deserve credit for seeing this through to the end.

Many pipeline opponents traveled to countless events and rallies to speak out against the Keystone XL pipeline. Some people who traveled all the way to Washington DC sacrificed a lot to get there. Many financed their own trips and even gave up their personal freedom by getting arrested during peaceful protests.

Farmers and ranchers who resisted easements along the path of the pipeline had their land taken away by TransCanada’s legal minions. I still don’t understand how our federal and state legislators could be in favor of eminent domain for a foreign corporation. TransCanada has obviously sold their souls for money.

The people working for TransCanada don’t act like human beings. A genuine human being will always put Mother Earth first. A real human being doesn’t sell out the entity which gives them life. The big oil corporations worship money. They have no boundaries when it comes to getting more money.

I know we all depend on money to survive but the greed demonstrated by the big oil corporations is pathetic. Our legislators from South Dakota are no better. Last week our delegation blasted President Obama for denying the permit. Those elected officials who supposedly speak for us in Washington also worship money. I am sure their campaigns were well financed by TransCanada as well as other big oil corporations.

So, I want to ask all the Lakota people who read my column to please register to vote. We have an important national election coming next year. It is imperative that we vote in people who have not only our best interests at heart, but the well-being of Mother Earth as well.

The fight against big oil is not over. You can be sure that TransCanada and other similar corporations will be groveling at the feet of those politicians who are disconnected from the Earth. The big oil executives will continue to gladly pump big money into the campaigns of the candidates who are most likely to move forward with the continued exploitation of Mother Earth.

Wopila to the Sicangu Lakota for establishing Oyate Wahacanka Woecun and for maintaining the Spirit Camp on tribal land near Ideal, SD. Many of our own people did not have faith in this spiritual effort. Our own people criticized our leaders for establishing the Spirit Camp. Yet, it was the prayers of our spiritual leaders and numerous others all over Mother Earth that helped to influence President Obama’s decision. 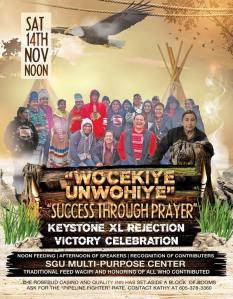 A wopila prayer circle and pot luck lunch was held over the weekend at the Spirit Camp. Today, the Rosebud Sioux Tribe begins a two day celebration to honor all pipeline fighters. A meal will be served at noon (11-13-2015) at Rosebud’s Tribal Headquarters. Tomorrow (11-14-2015) a public event will take place at the Sinte Gleska University Multipurpose building in Mission, SD. A meal will be served at noon. All are welcome to attend.

Wopila to all of you who prayed for this pipeline project to be stopped. I encourage our Lakota people to register and vote during the 2016 Presidential election. Thank you for your continued prayers on behalf of Mother Earth.