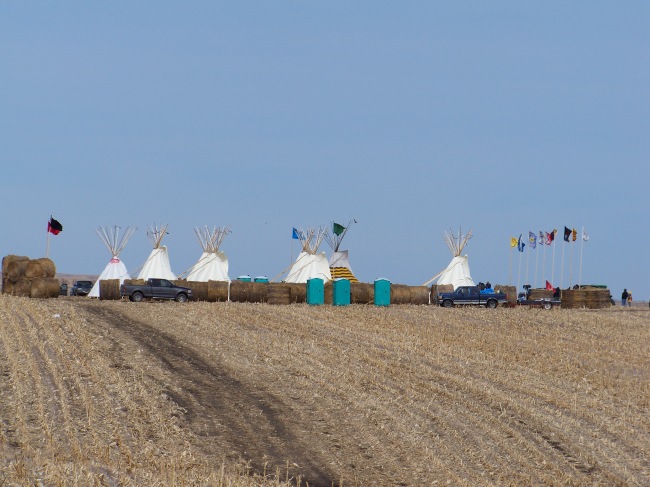 Photo and story by Vi Waln

IDEAL, SD – The Rosebud Sioux Tribe has set up a Spirit Camp as a peaceful, non-violent way to protest construction of the proposed Keystone XL pipeline (KXL).

Over one hundred cars caravanned to the site on March 29 from Mission, SD to attend opening ceremonies held over the weekend at the site which is located south of the Ideal Community on the Rosebud Reservation.

A ceremony was led by several local spiritual leaders and medicine was placed within the ground along the actual proposed KXL route. “We’re going to sit here and protect this medicine,” stated Russell Eagle Bear. He is a spokesperson for Oyate Wahacanka Woecun (Shield the People) which is an organization sponsored by the Rosebud Sioux Tribe. “Three more camps are scheduled along this [KXL] corridor,” he said. “We are doing this with prayer.”

“It’s good to see all of our relatives here. It’s good to see the all little ones here, this is what we are here for – to protect the future generations, for clean air, clean water and good land. ” stated Cyril Scott, RST President.

Scott also asked the people of Rosebud to boycott the Ampride station in Mission, SD and plans to ask the tribal council to revoke their business license. People gathered in the parking lot of the convenience store in preparation to caravan to the camp site were told by management they needed to leave because they were trespassing.

“Today we stand together, today we stand united,” stated Brandon Sazue, President of the Crow Creek Sioux Tribe. “The KXL pipeline will not come through here, I will die if I have too.”

“You can feel the power here,” stated Bryan Brewer, President of the Oglala Sioux Tribe. “This will be non-violent, we will take our coup stick and count coup. This Thursday the OST tribal council is going to declare war on the Keystone XL pipeline.”

Ed Schultz of MSNBC’s The Ed Show also traveled to South Dakota to witness the opening of the Spirit Camp. He interviewed tribal leaders along with several other people during the course of the day. KSFY of Sioux Falls, SD was also on site conducting interviews.

Eight tribal flags representing the Yankton, Cheyenne River, Rosebud, Oglala and Standing Rock Sioux Tribes of South Dakota as well as flags from the Shakopee Mdewakanton, Prairie Island and Upper Sioux Communities of Minnesota are all flying at the Spirit Camp. In addition, black, red, yellow, white, blue and green banners are also flying to represent the six directions.

Nine tipis have been erected in what was a cornfield on tribally owned land. The camp area also has a wall of 1,500 pound hay bales around it. There is a cook shack area located just north of the tipi area as well as a prayer lodge located south of it – both of these areas also have the big round hay bales set up around them. According to organizers, the camp will be manned 24 hours a day until the proposed Keystone XL pipeline permit is denied by President Barack Obama or ground is broken for construction.

Visitors can take highway 18 east of Mission, SD and then drive north on highway 53/183. Signs are posted along the way. The camp can be seen on the east side of the highway.